The Sprout Has Come Out (and with a bang, I might add) 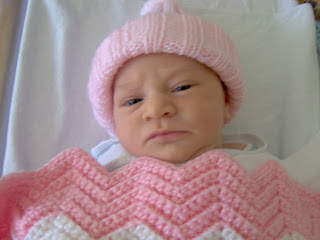 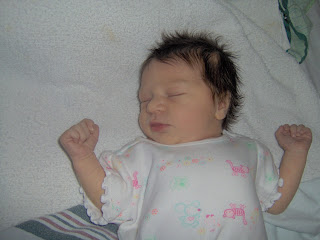 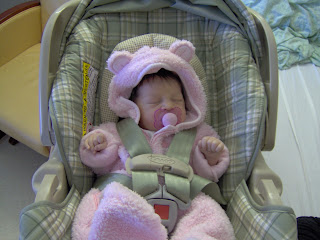 The story of her birth is approximately the polar opposite of what I expected it to be. With Eric, I had an easy, normal pregnancy, followed by 437 hours of labor, a relatively quick delivery (~1 hour of pushing), and a speedy recovery. With Ella, I also had an easy, normal pregnancy, and in terms of labor and delivery, I expected much of the same, only faster. Well...come to think of it, I guess I was right about the faster part.

I'd like to start by mentioning that it didn't exactly help matters that my doctor told me at my 38 week appointment (2 weeks before my March 5th due date, for those who aren't thoroughly schooled on the pregnancy calendar) that she didn't expect me to make it another week, and that she could do unpleasant things to me which she felt certain would send me into labor within 48 hours. I politely declined. However, from that point forward, I was almost constantly convinced that I was either in labor or on the verge of being in labor. But anyway.

At my March 5th appointment, she told me that I was absolutely ready to pop at any moment, and asked if I was interested in scheduling an induction. The benefits of scheduling an induction would be that I could pick a date or a doctor of my preference and plan childcare for Eric accordingly, without needing to call my parents in the middle of the night. I decided to schedule an induction to deliver with that doctor, because she was the doctor I had seen on 90% of my visits, and 2 of the other 3 I had only seen once. It just so happened that she was on call the next day, so she scheduled me to start my induction at 7:30 the next morning (March 6th).

Well, as fate would have it, the Sprout decided that she would like to come on March 6th, but on her own terms. I actually began having contractions on the evening of the 5th, and around 3:00 a.m. on the 6th, I decided it was time to call the doctor. By the time I got Chris up and we got ourselves ready to leave, it was about 4:00 a.m., and my contractions were very consistent at about 5 mins apart, and unpleasant, but very far from the absolutely excruciating contractions that I endured for several hours with Eric.

By the time we got to the hospital, parked, got into the ER (which is where we were directed to enter the hospital), and endured several of the stupidest questions ever from the ER receptionist person, it was about 4:30 a.m. Someone from Labor and Delivery came down to retrieve me, and brought me to the other side of the hospital and upstairs. I changed into the lovely hospital-issued attire and got into my bed, where my nurse proceeded to ask me questions pertaining to my entire medical history starting from conception, it seemed like. By the time we finished with that, it was probably 5:00 a.m., maybe a few minutes after.

The nurses went to call the on-call doctor from my practice to find out how she wanted them to proceed. Her orders were to get me an IV, get me an epidural, start me on pitocin to intensify my contractions, and have the on-duty resident OB come in and break my water. After that phone call, I'm sure she went back to bed and figured the next doctor on the rotation, who would be in at 7:00 am, would be delivering my baby.

And thus, the flurry of activity began. A nurse came in and started me on an IV of a saline solution which had been refrigerated. Anybody who has ever had a refrigerated IV pumped through them could tell you that it is not the most pleasant experience. I immediately began shivering uncontrollably. The nurse promised me that it would be done in no time, and as soon as it was, I could have an epidural. Another nurse came in and threw some pitocin into the IV cocktail as well. A few minutes after that, maybe between 5:30 and 5:40 a.m., some dude I had never seen before came in to break my water. The nurse reached into her bag of tricks and handed him something that looked not unlike a knitting needle. He pulled my blankets off of me, which of course made me shiver even more, and went about his business, while I turned my head, deciding it was probably better not to watch.

This is where things turned sour. I felt a rush of liquid, which I could only assume was my water breaking, but the doctor kept pushing and poking. A few moments later, he asked if I had ever been diagnosed with placenta problems--placenta previa, specifically (or a placenta that covers the cervix, essentially blocking the baby's escape path). I was initially diagnosed with that, but it supposedly resolved itself by 20 weeks. Meanwhile, he's still pushing, poking, putting lots and lots of pressure on me in a most uncomfortable fashion. Then he announced, "I don't like the looks of this one bit. All I'm getting is a whole lot of blood." He ran to get the ultrasound to check the baby. She was fine--stable--but then he began barking out orders in a tone that said, "We needed to have this baby out of her 5 minutes ago." "CALL HER DOCTOR NOW! GET HER TO THE O.R.!! GO! GO! GOOOO!!!" The nurses rushed me out of the room, ramming the bed into everything in their path. I heard someone tell Chris to stay put and someone would be back to instruct him further.

I don't remember a whole lot from the O.R., but I do remember that it seemed like there were 20 people in there, all poking or prodding me with something, and all stepping on each other's feet. I do remember someone trying to start another IV and not being able to find a vein. Somebody else instructed her to put it anywhere she could. I also remember being so freaking cold that I was literally convulsing on the operating table. Occasionally somebody would hang their head directly over mine and tell me that I was doing great and everything would be OK. I heard the Dr. announce that baby's vitals were stable and everybody needed to CALM DOWN and SLOW DOWN. Then he changed his mind and decided that they needed to go right away--whether or not my doctor was here. Next I heard someone announce that my Dr. had arrived. She ran over, said hi, and told me that she was here to do a c-section (no shit). "Has she had her spinal?" she asked. I heard the other doctor tell her, "No, we've got to knock her out." Cue the anesthesiologist. She hung her face over my face, introduced herself, and told me that she would be putting a mask on me and someone would be tapping my throat so that I didn't vomit. Once I was out, they would have the baby out in 3-5 minutes--closer to 3 if they could help it. Then she dropped the mask onto my face and 3...2...1...curtains.

The next thing I remember is hearing someone announce that my temperature was 97 degrees, and then she draped me with heated blankets, which felt sooooo nice. Chris came in and told me the baby had been taken to the NICU and that she was stable and doing well, but that she had lost blood and they were taking every possible precaution to ensure the best possible outcome. Even though she came out breathing on her own, they intubated her to reduce the strain on her body. They also inserted a catheter into her umbilical cord, and started a couple of IVs to give her various medicines. Then he explained what had happened, as the doctors had told him. Basically, I had malformation of the placenta (which wouldn't be noticeable by ultrasound unless someone was specifically looking for it), which caused the 3 blood vessels that form the umbilical cord, to grow out of the placenta, completely exposed, and then turn and come back into the placenta, and come out once again as a completely normal umbilical cord. And these three vessels, which basically are property of, and the main blood line to, the baby until birth, happened to be lying directly between the amniotic sac and the cervix--so basically there was no way the baby could have been born naturally. I was also told that I was very lucky to be at the hospital when my water broke, as immediate medical attention may not have been possible otherwise, and I very well may have lost the baby.

As it turns out, of all the things that could have happened to the baby during such a traumatic birth, none of them did. She is perfectly normal and healthy. We are feeling very blessed right now. And sleepy. I can't forget sleepy.