A friend of mine who has one child recently posed this question to me: Is having two kids twice as much work as having one kid? My immediate instinct was to say no, of course not--when you're already doing the work of taking care of one kid, you just need to tweak your routine a little bit to take care of two. But then, the more I thought about, the less sure I was of that answer. I mean, to be quite frank--and keep in mind that I love my children so much it hurts--taking care of an infant is soul-sucking; the gratification is long-delayed and the thanks you get is minimal to non-existent. It's hard to go from being an independent human being whose routine is so ingrained that it would be nearly impossible not to survive from day-to-day, to being needed every moment of every day for years on end. But you start to get used to it. And just as that last little sliver of self you had a death grip on finally slips out of your clutches and flails madly around the room like an untied balloon, mocking you until it finally collapses into a sad pile on the floor, your baby will start to be a little more independent and need you less.

Rather than rejoicing as you are able to piece yourself back together, you will instead find yourself lamenting the fact that your baby no longer clings to you, helpless. And the more time that passes, the harder it is to remember exactly how difficult those first several months were. Suddenly, you'll stumble upon a pile of tiny clothes and realize how much your child has grown and you'll find yourself actually wishing that you had another tiny little person who would fit into those tiny little clothes. And there you have it...by the time you realize how hard it is to raise a child, it's too late to do anything about it and just when you finally get used to your routine, your baby starts asserting his independence.

So, getting back to the question of whether two kids are twice the work, allow me to use an analogy. Imagine you were to step out onto the highway at a time when traffic is really moving along. You immediately get hit by a car. Does the second car that runs you over hurt twice as much? No, because you're already used to the pain. OK, OK, I'm sure that's not what anybody wants to hear. In reality, something that occurred to me in the first week or so of being a parent to two kids was that I already knew what I was doing the second time around, so I was far more efficient at parenting. If I had been half as efficient with the first as I was with the second, I would've gotten way more done. But now, instead of taking care of the baby and having free time to stay on top of house work, etc., I have time to take care of my older child. Some days it's not bad at all--I tend to one kiddo while the other one sleeps or keeps himself amused, and they just trade mommy time all day long. On other days they both need me NOW all day long, and it's not so much fun. But it's totally worth it.
Brought to you by Kristi at 12:59 AM No comments:

I took this in Michigan this week... 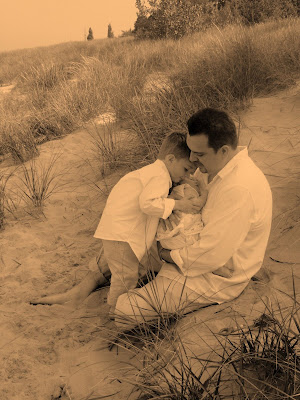 ...busy, tired and probably a little depressed, but also hopeful and optimistic.
...sarcastic, but I like to think my sarcasm becomes me.
...lucky to have a wonderful family and fabulous friends.
...looking forward to not being the only mother in my group of best friends.
...excited to be enrolled in an improv class this fall.
...sick of eating frozen pizza.
...thinking of getting a new hairstyle.
...waiting for Godot.
...in desperate need of a muse.
...feeling nostalgic. I always feel nostalgic this time of year--starting a new school year always felt like a chance for a new beginning, and I kind of miss that. Although nothing ever turned out as I imagined it would. Nothing ever turns out as I imagine it will. That's all part of the mystery of life, I guess.
...always curious about what might have been and what's to come.
...fascinated by bright lights and shiny objects.
Brought to you by Kristi at 12:26 AM 1 comment:

-I have the cutest kids ever (but it's possible that I'm biased...no, probably not)
-Mondays suck
-that I punct.u.ate better than the average bear
-I should work out more (or at all for that matter)
-and I would like to eat healthier too, but I'm too lazy (busy?)
-I need to get out more
-freshly cut grass smells nice
-all Hummers belong to men who are trying to make up for, um...shortcomings
-flip-flops are the best
-Starbucks is laced with crack, and also too expensive
-smart is sexy
-BTO is the poor man's Foghat
-karaoke is fun
-it's getting to the point where I'm no fun anymore (I am sorry)
-I'm too worried about what other people think about me
-I amuse myself far more than I amuse anyone else
-the Muppets ROCK!
-it's time for bed!