The picturesque town of Niles, IL

Although I technically live in the city of Chicago, I live very close to the edge, near the dreaded suburbs. In fact, if you didn't know I lived in Chicago and you came to visit, you might even erroneously think you were in the suburbs. Then you would get $75 parking ticket and that would clear things right up for you--you're in a real city; a city that doesn't mess around when it comes to parking scofflaws like yourself. Being that I live in an area of the city that is essentially a peninsula of Chicago, surrounded on three sides by suburbs, I tend to do a lot of my business outside the city. (You'll note that Chicago is so important that if you simply say "the city" to anyone in the greater metropolitan area, they'll know which city you mean.)

Sometimes my daily escapades bring me to a lovely little town called Niles. Oh, how to describe Niles... When I look around Niles, my brain automatically coverts the vision to black and white. I can just imagine peering into a house and seeing a woman in a dress, high heels and pearls, vacuuming with her brand new Hoover, while her children sit contently at the dining room table reading their Dick and Jane readers. Niles really came into its own in the 1950s.

The thing I l 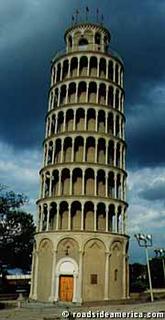 ike about Niles is that everytime I drive through I notice something new. The first point of interest is the Leaning Tower of Niles. This one's hard to miss. I guess I always knew this thing existed somewhere in the Chicagoland area, but I was never looking for it I guess. It's part of a YMCA. Whenever I go to the Niles Target or BRU, I get a little taste of Italy along the way. What's not to love about kitsch? What seems funny to me is that there are people who set out on roadtrips just dedicated to seeking out stuff like this, while I drive by it every time I need to buy diapers.

I also love that Niles' town motto is "Where People Count." I always wonder aloud if they can spell, too, but nobody ever gets it. Oh well, I'm lame, what can I say. There's just something delightfully tacky about the entire town of Niles. That's not a put down--it's just how this entire area is. It's definitely

more in-your-face than charming. Anyway, my most favorite thing about Niles is something that I just noticed last week, despite the fact that I've lived in this area for almost a year. As I was driving to Niles' Golf Mill mall (which has a tower protruding out of it that is constructed with a dimpled material that looks like--get this--a golf ball--how do they come up with these things?), I noticed a street sign that I've never seen used anywhere else. It says, "Don't even THINK of parking here." Oh no no, a simple "No Parking" sign wouldn't suffice--in Niles, you're not even supposed to think about it! Well guess what, Niles Police, I thought about it! And not only did I think about it, but I thought it would be pretty damn funny if I did park there and blatantly disobeyed your silly sign. Who do these people think they are? Poor Niles...I think when you're just a city near the city, you have to try a lot harder to get your point across. I think I should warn you, though, since we've already established that you're a parking scofflaw, that if you park there, or even think about it, they'll probably slap you with a $15 fine!
Brought to you by Kristi at 4:15 AM

Welcome to Big K..where we have nothing you want!

LMAO!! I have been to Niles (I think). I have relatives in Naperville...I am sending them this entry!