No, seriously--I do. Stop laughing. I mean it. Here, look: 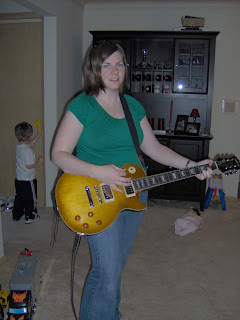 See? That's me and my (husband's) Les Paul. I was either playing the Alphabet, the Rainbow Connection or I Used to Love Her. Who could tell, really.

OK, OK, stop the presses. Eric just woke up. This is the conversation we just had:

Eric: Are we going to school, Mommy?

Me: In a little while, Eric.

E: But first I have to eat breakfast?

E: And I'm going to watch TV for a little while? And then get my dressed on? And then hurry up because we're late?

Apparently, in his eyes, our morning routine involves the element of being late. It's funny because it's true. Well, sort of. Every morning I tell him to hurry up so we're not late because he's just so damn pokey. I think it's a 3-year-old thing, honestly. But the fact that he schedules time in his morning routine to hurry up becase we're late just makes me laugh. And, also, "get my dressed on?" Seriously, I couldn't make this stuff up if I tried. But what do I know--I'm the parent who's teaching him to sing Why Does the Sun Shine just so that I can hear him say words like "incandescent" and "nuclear" (which, might I add, he pronounces correctly, if only because I'm a stickler for that sort of thing...E: New-cue-lar. M: Say it right, Eric, or Mommy's going to lock you in the basement again! Just kidding--I would never do that to my baby boy. Not before his fourth birthday, at least.)