Eric woke up at 9 a.m., shrieking. He came down sick yesterday, so I immediately ran to check on him. I opened the door to his room and it smelled like an exhibit at the zoo. I knew I was in for a real treat. He was sitting in his crib in a puddle of gooey poopy stuff which had leaked out of his diaper. I picked him up and, before I even hugged him, I started the clean up/diaper change process. He just laid there on his changing table looking half asleep and saying in his most pathetic voice, "Hungry. Want milk. Hungry. Want milk!"

So, being both a complete idiot and sucker, I get him some milk and a waffle and set him on the couch to eat it. I run back to his room and strip down the crib, where I realize that the mess soaked through the pillow case and the pillow cover and is stinking up his pillow. Yuck. I take the armful of stinky bed clothes and run back to the office, where Eric is halfheartedly drinking his milk and eating his waffle. He looks like he lacks the energy required to get into any sort of trouble, so I run downstairs to throw the stuff in the washing machine.

When I come back up, he's still just sitting there looking sick. I try to get him to take another bite of his waffle and he shakes his head no. Then goes pale and gets this look on his face. I knew it was coming, but there was no time to react. He turns his head and pukes all over the pillow, the blanket which covers our futon and his favorite stuffed animal and blanket, which were somehow spared in the crib mess. Then he starts crying. All he wants is for me to pick him up, but he's all covered in puke. I strip him of his second pair of pajamas, pick him up and hug him while ripping the blanket off the futon, and gathering all the other puked-on things. I throw away the rest of his waffle and he absolutely loses it. "Hungry! Want waffle! Milk! Want milk! Thirsty!"

I run to the kitchen, stick another waffle in the toaster and get him some apple juice. I stick him in a third pair of pajamas and set him in his little armchair. I give him the juice and the waffle and I run downstairs with the second set of dirty bed clothes. I add them to the original load and sprint back upstairs. Eric's just sitting there in his chair. He hasn't eaten any of the waffle, but I'm not about to encourage him. He has taken a few sips of the juice. He's just sort of laying there struggling to keep his eyes open. I sit in the chair next him and rub his head. All of a sudden, he leans forward and lowers himself out of the chair and onto the floor. He spreads out on the floor, on his tummy. I sit next to him and rub his back for a couple seconds. He seems peaceful and content....then he pukes all over the floor. And, I should mention that he puked on the area rug, missing the tile by a mere inch. Anyway...that was my morning. Hope yours was better! 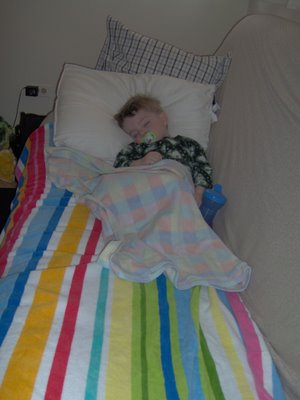 Here he is laying on the futon, on top of a beach towel on a pillow with no pillow case because...you know--fool me once...
Brought to you by Kristi at 2:31 PM